A long story of a deck that got me into cassette decks repair.

Back in 2009, I was a beginner in cassettes, my father in law gave me his cassette deck he doesn't uses anymore.
A nice Pioneer CT-50R bought after his military service in 1983, liked this cool design first and the autoreverse function.
But it's not working and that given me headaches for a long time !
The idler tire was badly slipping, tried a lot of tricks such as sanding, putting more pressure in the spring, using O'ring... but none of them worked so I left the deck in a box for a while.

Sometimes I put it out the box and tried again to brought it back to life with no success, even thought a moment the head had an open coil.
Broke several other parts due to multiple disassembly, capstan motor, head wires, power supply transistor...
The absence of mechanism exploded view in the service manual didn't helped through.

In 2014 I've got more experience in cassette deck repairing, that even was a little business for some years.
So I've decided to brought it back to life and this time that was a success !

The capstan motor is dead, tried to rebuild it but the collector and brushes were too much worn.

Some plastic posts were broken, missing washers and screws.
Some head wires were broken.
The autoreverse switch made erratic contact due to oxidation. 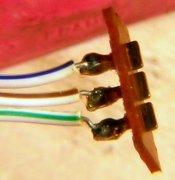 Almost working, forward play & recording is good but the autoreverse is erratic, that was due to the oxidation in the autoreverse switch.
So disassembly again, opening and desoxiding the switch, now works great !

Found the #2 in France with some original catalogue pages (featuring the bigger brothers CT-70R & CT-90R).
#3 came from UK, it was very poorly packed, the front panel board got pushed inside but luckily nothing broken.
#4 came from Germany, in pretty good condition, just needed new belts & tire and some cleaning.
#5 came also from Germany it was cheap due to missing rec level knob.
I've disassembled it to have parts in better shape for the #1.
Also found a CT-1150R in UK, same deck inside but with some minor cosmetic differences, restoration pending as I have other decks to fix before.

This series of Pioneer decks from the early to mid-80's were quite a departure - stylistically - from earlier models. It is becoming a well-known fact there had to be at least three revisions to the tape transport mechanism because of premature failure in the auto-reverse function.

That was extensive work entailed in getting your CT-50R working again, Leo. Do you know whether the CT-50R had Ribbon Sendust heads like The CT-90R?

Hi Nando, the CT-50R uses common permalloy heads.
The mechanism is very different, it's a two DC motor, way more reliable than the 3 motor direct-drive mechanism used in other models.

So, the CT-90R, which was the carry-over model from the CT-9R, have the problematic tape transport?

Yes, and also the CT-70R.
I have the French catalogue pages of these 3 models.

Well we all come across switches that do not clean up and sometimes have to be cleaned in an ultrasonic bath. The motors people always thing you are going to rebuild or restore never work out for very long. The largest mistake made by locals is no oil in the bearing where they are needed. This would also mean the top bearing of the capstan motor and reel motor. I guess you found out about that these decks don't only need a belt.

Hi Sam, yes that's the difference between the average epay sellers who are just a bunch of belts changers and the real techs who really knows what they are doing.
It's easy to know how it works but it's way more difficult to know why...

That is correct. The deck I was working on recently was a chinese type transport that uses two solenoids to kick a rotation wheel to cause transport changes and they fire for a short period of time. The grease hey used was so degraded that it was sticky and cause parts not to move or at least not very fast. You have to wonder were there any Japanese decks made with correct grease in them? Lubriplate was around since before WW2. I cleaned it with Denatured and then applied some lubriplate and Amsoil to the flywheel and other rotating shafts. It is working now.

Here is the pages of the French catalogue :

Thanks for scanning and posting those pages, Leo.

I have the CA-100 and SG-90 featured at the bottom of the page in the Accessories section.

And the SG-90 equalizer and an NOS JT-216 wired remote control:

Thanks Nando, I do have a CA-100 "Tape Creating Amplifier", very useful for decks which doesn't have fade in/out function.
The SG-90 is very nice, I guess it has two tape loops and some other cool features, just missing a large spectrum display.

Some pictures, featuring a Maxell MX (I'd like to find a Pioneer M1a, or at least a C1a or N1a).

20tajk7 said:
Some pictures, featuring a Maxell MX (I'd like to find a Pioneer M1a, or at least a C1a or N1a).
Click to expand...
back in mid 80's or so, there was a Pioneer HiFi shop near my home... back then, i used to buy Sony blanks at another shop just besides that Pioneer one and one day I found that shop closed, so I entered the Pioneer shop and asked them some Sony blanks... they replied to me: "no, we only have Pioneer blanks!" and while thinking they were poor stuff I replied "no, thanks! I wanted the Sony!"... and never entered that Pioneer shop again.

over the latest 10 years, I finally happened to get 3 differert Pioneer cassettes, 2 used and a sealed one... if i remember correctly, they are a N2 , a N2a and a N1T... the N1T is a model from south America, though.

Good to know you have the CA-100, too. The SG-90 does auto fade-in and fade-out, plus has mixing capabilities.

I, currently, have my Sansui SE-9 Compu-Equalizer up for consignment sale at Innovative Audio. I wouldn't be selling it, unless I had something more unique to replace it.

Amazing, I love it.
Too bad the cursors didn't all move at once like in some pro mixing consoles.

Those are motorized faders and you don't get that for cheap.

happened to have some fun in using a Yamaha 02R console at a live gig a few years ago (i was the guy at the mixing console, of course)... it was just fun to see all those faders jumping to the positions/settings i had stored in memory, or when i switched their purposes (they are multi-purpose faders) by simply pushing a button.... i.e. they could show me the effect send levels or the levels on the stage monitors or the levels on the main speakers, etc...

but, save for the fun of it, maybe they aren't really needed on a home HiFi system.

but, while mixing my own multitrack songs here at home, i am quite happy with the software... automated controls in a DAW software are obvious and don't need any expensive motorized faders, though.

It is all added cost and a bunch of marketing and really does not have a lot of purpose in this consumer situation. Face it this is a gimmick.
Why would you need such up and down extremes anyway?