I bought mine from Joe. Happy with them, besides why not keep the money close ?

12 K snapins do nicely when coupled with Joe's cap screw converters. Like Joe told me, pretty much anything over 11 is just bragging rights LOL. They are fairly small in diameter as well so they don't risk any chance of hitting the meter lugs with the buss bar.

Everyone has their own learning curve.. which should be encouraged if the aptitude is there.

I like to think I have the very best "stock" PL 400 anywhere. Deigned by Bob, Filter caps and LED lighting by Joe, Output transistors by Sniffer, Bias by Lee and Protect circuit by Dan.

But not passed over...

New caps and bridge. DBT goes bright and then.... Dim

. A couple of pics
Waiting for the protect board before running with speakers. 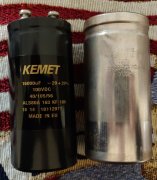 I like it, nice. Did you build the copper buss or was it factory stock that way ? I am glad to see that you were able to put in the caps across the BR. Are you still re capping the mainboard ?

The copper bus was factory. I intend to recap the main board but I wanted to take baby steps. I have everything I need to recap including the C6 mod.

It bothers me that this main board doesn't seem to be represented in the 400 service manual from hifiengine. The manual is supposed to cover s/n's 000-000 to 743-300 and mine is 342-158. The schematics and pcb part outlines don't seem to jive with what I have. I'm concerned that what I think C6 is, really is C6. I know laatsch55 has already confirmed it but I'd just like to see it in black and white. No offense laatsch55 it's just the way I am.

Offset (measure speaker terminals)?
Left = -138mV
Right = +10mV
Measured in the garage @ about 45°F. I only waited about 5 minutes for it to stabilize. It was still floating around when I recorded the values.

Whats the book say on Offset? Left side seems high.....

The service manual, I have, says up to +/-75mV is OK. R8 is supposed to remedy this. I'm not completely sure which of the three pots per channel is R8.

I'm glad there was no Kaboom when I hit the power.

The 400 series 1 amps went into production in December 1971. The serial number on the sticker is date coded, i.e. 342-153, the first number (3) would indicate the month of March, the second number (4) would indicate a model 400, the third number (2) would indicate the year 1972, -153 would indicate it was the 153rd unit build that month. Early 400's had Midland brand VU meters which were the most unreliable of all VU meters Phase Linear ever used. You many not be able to replace them with a later Honeywell, Jewell or Dixson because the Midland's were smaller and if my memory serves me correct, so was the meter bezel. What you have in the amplifier is a very early PL400C pc board with dc offset trim-pots. There were a number of revisions made to the PL400C boards during the course of time. The carbon composition resistors on early 400's and 700 series 1 amps are going up in value. At the very least, you could measure them all in-circuit. However you may have something in parallel with the resistor so the measurement may read below the lower limit of -10%. On the other hand, obviously if the resistor measures higher than +10% it needs to be replaced. You also need to reverse the probes when taking a measurement because a diode or transistor may be in parallel with the resistor. In my case, I remove all the carbon comps and replace them with carbon films. You might consider metal film resistors. Also, the brands of electrolytic capacitors Phase Linear was using at that time have a high failure rate and this case I would recommend replacements for all of them. Later on Phase Linear began using much better brands of electrolytic capacitors (i.e. Nichicon). Most people replace all capacitors as a matter of course. I don't necessarily subscribe to this policy, as I have tested thousands of electrolytic caps and have the ability to measure for value, leakage and ESR. (NOTE: Someday I may also measure dielectric absorption and noise). However, since everyone expects or wants newer capacitors I oblige them and install Nichicons. The Nichicons are also all 4 digit date code (i.e. the first (2) numbers are the year, the next (2) are the week). Most people aren't aware of long they should take a "leakage" measurement on electrolytic capacitors. The MIL-C-62F standard requires a time period of 5 minutes. I have seen other documents that have called out for 3 minutes. The ceramic disc capacitors are also going down in value over time. However, I haven't seen any that have completely failed. The ceramic discs Phase Linear used can be anywhere from +/-10%, +/-20% or even +/-30%. So it doesn't appear that the absolute value was that critical for them. The 400 series 1 amp with a PL400C is capable of measuring 108dB signal-to-noise ratio (unweighted). I have (2) amps currently that can do that. The later 400's with PL14 series pc boards are around 102-103dB (unweighted). Later 400 series 2 pc boards are "A" weighted at 110dB. However, with this "A" weighting being applied, it rolls off the low frequencies and high frequencies. Phase Linear Series Two amps, if you measure them unweighted are typically around 95-98 dB. The White Oak audio rev E boards I measured so far are more similar (with respect to signal to noise) to that of a series two pc board. The channel separation is also something else to take a look at when comparing pc boards and back plane boards.
Last edited: Jan 27, 2019
You must log in or register to reply here.
Share: Facebook Twitter Reddit Pinterest Tumblr WhatsApp Email Link
Top