What is your favourite DAT unit? And Why?

As per the title, do you have a favourite DAT machine? And why is it your favourite?

I have a couple of DAT Machines, and my favourite was always the Sony DTC-1000ES, Why ? Because it looks nice, it handles tapes nicely and is easy to use...oh and it is very well built.

Move on a few years and recently i picked up a lovely conditioned Sony PCM-R500...

Now this thing is now my favourite machine, the transport is superb, the functions are well laid out and it can handle DDS4 tapes!

Back to the original question? Which is your favourite machine and why?

I'm afraid I haven't seen one in person in well over 25 years, and I don't remember the make, it was in my small college's recording instructor's small srudio (closet is really what it was) with a Mac and a pair of Paradigms for monitors.

I saw a DCC deck 2-3 times at our Sears or maybe Radio Shack when it was new but never got to try it out before it was gone.

I had a Sony, don't remember the model, I had about 50 tapes and one day it just stopped working, it got stolen several years ago along with some cherished SAE stuff.

I liked it, it was great for recording, not as nice as the cassette decks I have now tho.

Honest question...... I have notice on some CD's that the material kind of lost it's "soul", from the analog recording. Not quite sterile, but you could tell the difference form the source. Does the DAT do the same? I've never owned one or listened to one so I am curious as to what the finished product is like. I have an Ipod and it works great for what I use it for (I listen to it in the amp shack and don't have to mess with it since it has like 1000 songs on it), but I may entertain something along this line down the road. I kind of enjoyed dickin around with the Yamaha cassette deck. I don't even know if they use their own brand or format of cassettes. I do think I recall DAT tapes of some sort. Maybe I should get out from underneath my rock once in a while..... Oh, and I do like the looks of those decks. Kind of an industrial look to them.

The Sony DTC-1000ES has a soft spot in my heart, my wife's first cd was mixed down on to a Sony DTC-1000ES to send off to for final mastering for cd production. That was 30 years ago. Still have the tape and nothing to play it on. They were a nice sounding digital source.

Some of us never owned a DAT machine.

Lazarus Short said:
Some of us never owned a DAT machine.
Click to expand...
I'm reading about them right now. I would like to try one. Looks like I can plug my TT right into the back and record all my albums.

I was looking at a pic of the insides of a PCM-R500, the tape transport kinda looks cheap like a regular cassette player. Are they any more robust or reliable? I see they use same old cassette belts too.

The tapes are listed as holding Gig's and not minutes, how do they compare time wise when set at like 44Khz?

Does anybody know anything about them here?

I don't believe that analog can be converted into digital without losing something that makes it alive. Using more electronics to supposedly bring it back doesn't seem to work it just seems to make the music stronger, hotter, louder, don't really know the right word for it. Growing up on analog maybe makes me closed minded but so many these days most have only heard digital sound and believe that's what music sounds like.

How many times do we need to dicuss this peeps? Music is a series of vibrations and tones, not just 1's and 0's in a sequencs

stuwee said:
How many times do we need to dicuss this peeps? Music is a series of vibrations and tones, not just 1's and 0's in a sequencs
Click to expand...
HEY!!!! I like CD's. They make great drink coasters

I have been involved with the DAT format for the past 13 years. My first DAT recording deck was a Tascam DA-30. Back then I could still buy new blank DAT tapes from a tape supplier for recording studios, about an hour's drive south of me, in Vancouver. I still have the Tascam DA-30 and it's still working fine. And I still have a healthy reserve of blank tapes. I bought my DA-30 from Innovative Audio, when they were located at a much smaller location than where their store is presently located.

Ron (Northwinds) had a great collection of DAT tapes, comprised mostly of studio recordings, which I bought from him, years back. DAT format was very popular as a recording format for studios in the late 80's. 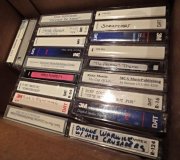 
Then, just over a year ago, I bought a Sony DTC-1000ES deck. I watched it languish on Craigslist for a few months, the price being steadily reduced, with each new update of the ad. It was a 1.5 hour drive to get to the seller's place to demo the deck. The seller didn't have a transformer to operate the deck as it was a 100 V model and he didn't have any tapes. So, I purchased a good transformer, brought a couple of tapes, and headphones to test it. The deck had been sitting outside in a garage/workshop. It powered up fine, but none of the functions would work. I offered $100, which he accepted, as I explained to him I didn't know how much it would cost to repair it, or whether I was gambling on something that couldn't be fixed. Geri was with me on that trip.

I got the deck home, plugged it into the transformer, and just let it sit powered up for over an hour. Then lo and behold it began working properly, and it has been part of my system ever since. I do owe Pat (Glantoir) a mix tape as he recorded one for me, but I need to get through a small backlog of compact cassette tape recordings, first. This year, I, also, bought an NOS remote control for the DAT deck, which also operates my Sony CDP-X7ESD CD player.

So, the Sony DTC-1000ES is my favourite DAT deck. It has the looks I love and matches my other stereo system components.

you got a great deal Nando. I see a beat to hell one for $450. And I'm like you, can't bare to see rough gear out front.

I'll have to kick this DAT/Mini Disc idea around.

I had a Philips DCC 900 Digital Compact Cassette recorder & player DAT once. Something went in it and I got rid of it...…...

Well ok, that do not explain why it was my favorite, I think I still have one DAT cassette somewhere...

DAT is cool but why commit digital to tape that is 'long'. Going digital ain't what it used to be (thank God) but now that it's a real contender, optical disc is the only format that makes sense to me when it comes to creating an archive. FLAC or wave into Tools then into files for the mobile, CD for the archival ... and finally to tape for the final transcript 'back to analog warmth'. I know, I'm weird.

All good responses, I actually quite like the format, to me it bridges the gap between tape ( Great ) and the underworld ( Digital) ... Seriously i find it quite a forgiving format, and really useful for mastering a mix tape before copying back to normal cassette.

As per WOPL's comments, the tapes marked up in GB's are not strictly speaking DAT tapes, you can use DDS1 & 2 tapes in a normal DAT machine, after that the tapes get thinner ( DDS3 & DDS4 ) but the length of tape can be as much as 4 hours - Only a few DAT machines can handle tapes like this ( The Sony R500 can as it is a four motor direct drive ) There are a few others that can also use the larger GB tapes.

The sound i find very good - I downloaded a travelling MD project yesterday ( FLAC files) and recorded it directly to DAT - Sounds great.

It is not for everyone, but there again neither is Elcaset! ( Another format i love!)

Shaun: Your Sony PCM-R500 has a long play feature where you can double the amount of recording time on tape at a lower bit resolution - 16 bit in standard play mode and 12 bit in long play mode.

There is a Fostex D-25 pro DAT recorder for sale, locally. No one seems interested in it as it has been listed for over a year, even at a $350 asking price.

I am determined to get the proper cabling to delve into DTRS format. I picked up a Tascam DA-98 which use Hi8 mm video cassettes to record up to 8 tracks of 16 bit resolution audio tracks.

I bought it last year, but haven't got around to buying the proper cables to interface with my system for recording.

A video of its first test. I've cleaned it up since buying it. I have to learn how to format the tape. That's why the time counter doesn't display as the tape is playing.