He was in hospice after health complications forced a premature end to his final tour in 2018.

Rogers rose to fame in the folk music group New Christy Minstrels, which became the foundation of his band the First Edition and later as a solo artist.

He was well known for his album The Gambler and performances with Country legends like Dottie West, Sheena Easton and Dolly Parton.

He is a member of country halls of fame and also had a chain of restaurants, Kenny Rogers Roasters (chicken). He was married five times.

His gravelly voice and storytelling songs were legendary. He will be fondly remembered by generations of current fans and new fans to come. 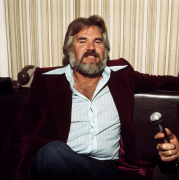 ​
Perhaps the one thing his fans won't want to remember is the plastic surgery that they feel ruined his good looks, Otherwise he was one of the greatest singers of the late 20th century,