Hurry..Hurry get this deal of the century.

Tagline
Are you satisfied with the life you're living

Tagline
Are you satisfied with the life you're living

no thanks they can keep it I want one of these 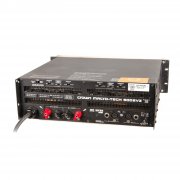 one of this would also be a good pick

Who rates the power output of these things? How do they rate them? I have to get 53Vrms output to calibrate the cylons of my 700 to represent 350 watts, and this thing uses a 20vdc power supply! You can’t get more out than you put in, unless it’s nuclear fusion!

My bro-in-law gave me a TV sound system with five 3” speakers and a sub with a 5” driver on the front- supposedly a 700w system. I opened the sub cabinet and the circuit board wasn’t much bigger than what you find in a transistor radio. 700 watts power consumption, maybe- but not output!

I read the reviews on this device and think they were written by the manufacturer.

Tagline
Life is short, so take your time

That probably puts out around 2 watts

Location
In witness protection with the 'old' ME

K-5BLAZER said:
one of this would also be a good pick View attachment 50138 View attachment 50140 View attachment 50141
Click to expand...
I've got an old Amcron/Crown Macrotech 2402 and there's just no way I could EVER utilise it's max potential. Not in a room 15m x 10m x 4m that's for sure. Let alone even trying to find something to hook up to it that could handle the gazillion watts these things put out.
My head would implode, and then the windows would blow out.

I could believe 600 milliwatts. Maybe this also doubles as a perpetual motion machine.

I know nothing about it, No affiliation. Just saw them and if you want, get em.

That aint no bargain..

The unfortunateness of a joystick. If it were a Carver, etc.

Yep, saw it was not any where near me but who knows one of you might get them by talking em down or whatever. They look to be in nice shape no ?

Location
In witness protection with the 'old' ME