If the Sony is $500, you really need to check these out. (Stolen web photos not as good as Miles’) 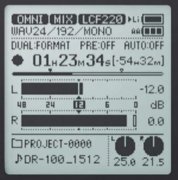 A couple things on the display to point out, that I think are worth mentioning.

Two power sources shown (internal Li-Ion and AA batteries). It also can be run via USB power as well as a “back pack” AA carrier with a USB cable. Bottom line: you’ll never be out of power. And if there is some power internal, you can “hot swap” the backpack.

Dual format. My Eos 1D did the same- I got stupid huge RAW images for publishing but Jpg proofs as well for every shot. Culling with the jpg version is much faster. In this case, 24/96 and a mp3 for knocking around.

I believe it also does a safety track (probably can be disabled) that is -12 dB or so. That way, a dudden burst of sound (cough etc) doesn’t destroy a take. Uni and Omni mics built in, plus XLR and TRS inputs for “real” mics. Many video sync features too but they have other models tailored for that.

Aluminum housing so it doesn’t shatter when (not if) it’s dropped. 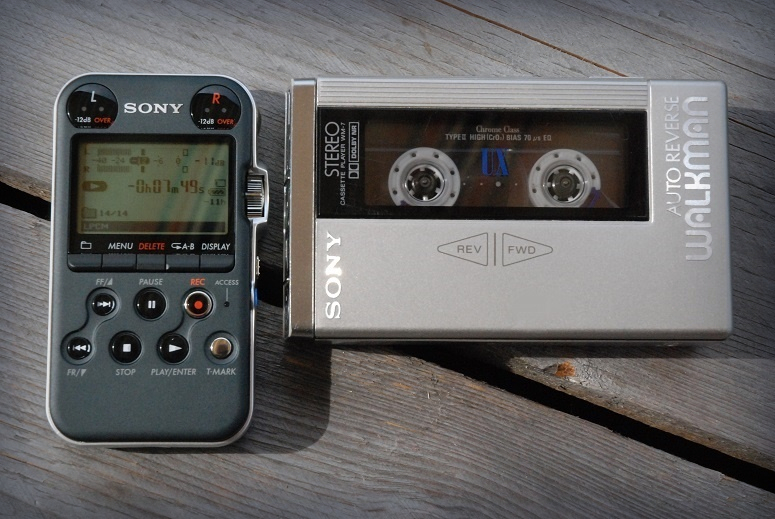 I like that Tascam a lot, Jim. I like its feature set. Have always liked the sound of their converters and their new mic-pres are very nice for anything that doesn't have David Deaden's or Rupert Neve's name on it. It looks like it's the portable equivalent of my Tascam UH-7000 converter that's in my big system, with which I'm most impressed. It's as close to a Lynx Hi-Lo as you can get without dropping the $3k on that box.

That said, the issue for me in going portable is doing the fewest conversions possible on thousands of song files. The bulk (but not all) of my AIF files have been converted to FLAC as I started out using a piece of shareware (Songbird and later, its successor, Nightingale) for my controller/player on the computer in my system. And those programs only run FLAC files. Since I bit the bullet and got JRiver's Media Center software, I've gotten lazy and just leave stuff in AIF format as it plays everything. So, to paraphrase Lucy, I got some convertin' to do...

If I'm totaly lazy, I buy one of the A&Ks or Sony Walkmans or Fios or whatever players as they play every file format. If I went the recorder route, however, the Sony beats the Tascam because it plays FLAC files along with WAV. I still have to convert my latest files, and truth be told, I'd have to go back and compare every 24/96 FLAC with its 24/192 AIF master to make sure I've converted everything I have in AIF format. That's time consuming enough. But to convert 95% of my stuff to WAV would be a royal pain unless someone knows of a program that can do mass simultaneous conversions.

I have to check the manual on the Mk. III I thought (and could very well be incorrect) that it could handle "standard" file formats, including AIFF.

For me, I have too much gear already. If I'm buying "new" (which could actually be brand new, or just new to me) I want to be sure it has maximum flexibility. I totally get the loss of life involved with re-formatting terabytes of audio files.

I guess one must weigh the plusses and minuses of all their options and jump in and live with the decision.

And yes, these latest converters in the Mk. III are reported to be quite stellar. So much so, it may become the DAC in my home system when not doing other things... So if you need a home DAC it can do that really well too. Besides the obvious digitizing of analogue sources...

You might be right about the formats. I just did a quick scan, but here's the manual if you want to dig in a bit deeper (this thing has massive power)

I've been going by the specs on Vintage King and Sweetwater's web sites regarding file formats; I'll check that manual, though. Thanks.

In the end, gear may not be my biggest consideration. I'm still on the fence about this but in my most radical iteration of this listening concept, I just go 100% millenial and sell all my albums, tapes, and home stereo equipment and listen to a digital player through headphones. I'd have a DM-6C Walkman and a some cassette tapes just for nostalgia's sake and possibly a portable headphone amp and a pair of KEF LS50 wireless speakers in the living room (maybe). The backups would be kept on a couple of hard drives on my computer.

In that scenario, a portable recorder might be a better option even if it entails more work on the front end.

Did I just read that right, Bob?

You sure you don't have the virus?

Step AWAY from the hard drive, and keep your hands where I can see them!

I wish I had kept the original outer boxes from my (ruined) pre-recorded tapes I bought through the 80's and 90's. Because now I can re-record them from clean vinyl or digital onto a quality tape and have the original art...

Per the (official) link below-

EDIT_ One thing I noticed is that the firmware updates actually have value. Things like internal clock accuracy improvement is one that stood out for me. So, if you get a pre-loved one, update the firmware first thing.
Last edited: Mar 20, 2020

I wish I had kept the original outer boxes from my (ruined) pre-recorded tapes I bought through the 80's and 90's. Because now I can re-record them from clean vinyl or digital onto a quality tape and have the original art...
Click to expand...
I know. It's tough to consider but if I travel as I hope to starting next year, I'll not have that much need of this stuff. It's one reason I'm in a push to digitize. It's the software in the grooves/on the tape/on the hard drive that counts, not the physical media. And I want to make sure I have all of it in digital form. It's going with me even if it takes a couple dozen 256 gig SD cards.

But as I said, I'm still on the fence. If we keep our house as a home base, I'm in better shape to keep what I have. If not, I'd need a 7.3 diesel Excursion to pull the trailer with all that shit in it. And another one to pull the living quarters. Hence, digital as an option.

I can relate. I lived out of a Land-Rover in North Africa in 2001. And it was an 88", so no room for anything not needed, and NOTHING could be out of place, or it'd never fit back in again...

I had some very good results recording with the Sony PCM-M10, which I still use: 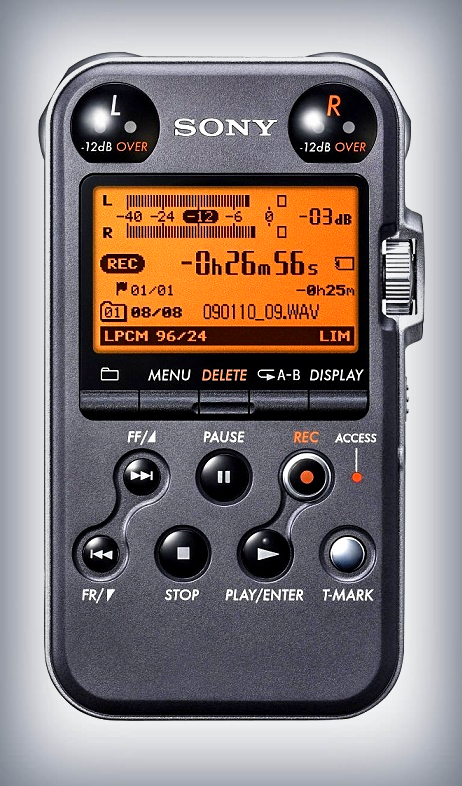 Here's an example (click link below) of a recording I did of my classic Mini Cooper S in an empty parking garage:

Welp, pulled the trigger today. Ordered an Astell & Kern AK70 MkII from their website. They were running a closeout for $429, down from $699. Figured for new it wasn't getting any better than that. They had a closeout on first gen Ak70s not too long ago for $400 and I wasn't ready (not that I am now) but I figure dual DACs are worth the extra $30. We shall soon see how I get along with my first ever Android device.

Gotta order a 256 gig micro SD card next. The player's internal memory will hold all of my 24/96 mixes (if I use the FLAC copies) but not the album archive. Wait another month and get a second 256 card to get the entire archive ready to travel. Just figured out that you can't just buy a plug-in balanced cord for the DT880 Pros, either. Not sure if I want to tackle the DIY cord or not. Might be better for me to start with building that little Starving Student headphone amp over at the DIY store if it's back in stock.

Since I’m good at spending The money of others, you may consider a small Pelican case for the player and cards, so everything is safe.

A bit bigger and add the amp too.

Harbor freight has a knock-off that is supposedly decent but I haven’t checked them out myself yet.

I have one of those Harbor Freight cases for the microphones and small stuff for the portable PA system I have at work. It's actually pretty decent. I used to have several pelican cases for photo gear back in the day; wish I'd never parted with them.

Probably gonna find some kind of leather case for everyday use protection first, then look into a bigger case for traveling, etc.

I have a larger pelican with wheels, fold out handle and a “lid organizer” for my camera. Everything but the tripod and monopod fit in there.

Good thing it has wheels...

We use pelican cases in the oilfierld to hold our H2S gear...damn good cases...

I never found anything better, Lee.

More for the “silver face” crowd.

So this little AK 70 MK II rocks! A/B testing a couple of files on the computer (played through the Tascam 24/192 converter) with the headphone output of the AK into the amps. Can't spot any difference. Didn't take long to get all of my mix tape files transferred to the player, in spite of dire warnings that Macs and Androids don't play nice in the same sandbox.

Plan is for the mix tape files to reside in memory on the player with all of the albums on 256 gig micro SD cards. It sounded pretty nice with the AKGs, too, though the Pro version of the 880's 250 ohm impedance keeps the volume from getting too far out of hand. probably a good thing. Must listen more like this, but playing through the system is confirming that this is a nice little DAP. Very solid feel, as well. Heavy chunk of aluminum to be so small. Could not believe the size - it's a full 1.5" shorter than my iPhone SE, which is pretty small in the world of smartphones.

Finally got around to ordering the micro SD cards for the album collection. Still transferring stuff onto the second card but am already realizing the game-changing nature of this device for me. Not sure yet where the journey will take me as far as consolidating equipment and becoming more light-footed, but I can see a future with a lot less stuff - and a lot more flexibility - in it.
You must log in or register to reply here.
Share: Facebook Twitter Reddit Pinterest Tumblr WhatsApp Email Link
Top