I don't know if it was the white oak mod or not but there was a mod posted in PDF form on this forum. It described a way to convert the PL 1000 to unity gain like the 4000, and some resistor changes to extend the range of the peak unlimiter and downward expander. I liked this idea, but I wanted to be able to adjust it. I noticed all the changes for this purpose involved putting resistors in parallel with resistors already in the circuit, which would reduce the resistance values. So I did a few calculations and figured out what would be the low value achieved by these parallel resistors and I found some resistors of the same value, and then I wired these in series with some 10 turn potentiometers that at maximum resistance value would bring the resistance up to what it is originally, at lowest value it would bring the resistance down to the modified level. The end result is a PL 1000 where the unlimiter range and downward expander range can be adjusted as desired. Loving this little box!

If anybody is interested in knowing more about this I'd be happy to post the values and substitutions I ended up with.

Josh: Just began playing some of the archived music files - lots of gems among them.

Which Garrard turntable have you got? Also, very interested in your hopped-up cassette decks.

I've owned a couple of Garrards, including my favourite - a 2nd owner Type A 70 changer. 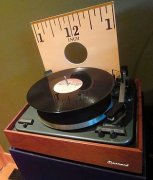 Very nice, Nando. Mine is nothing too special, it's a SL95B. I found it on the curb, believe it or not. The changer doesn't function (seems it was missing the pieces) but aside from that it's still chugging along.

Glad you're enjoying the archived tapes - agreed there are some surprisingly good recordings on there. Makes you wonder how much good music never broke through to the mainstream back then.

The functionally hopped-up among my cassette decks at the moment is confined to a single BX-100. It's actually shockingly easy to modify this deck to record and play cassettes at 3.75 IPS. I was gifted a large size brass pulley (though there are probably other ways of sourcing such things) from Nikolai, I suppose as a kind of reward for my interest in his 2T double speed cassette project. Aside from that, a couple of very minor modifications to the electronics and a recalibration is all that's needed. Not remembering off the top of my head but I believe it involves removing two resistors and changing the value of a capacitor - something like that. I have it written down somewhere. The sound quality is really nice and side A and side B of a C-90 line up perfectly with the sides of an LP. As long as I can fit a full album on a tape, I don't feel inconvenienced.

The 2T head introduces other problems that must be solved - for one thing there is insufficient bias current to get the recordings dialed in properly. Erase also requires a head modification, obviously, since the original erase head only erases one half of the tape. I grabbed an erase head from a Tascam T-3000 duplicator (which is dual gap, so can erase metals as well). This head is able to erase a tape, full track, with the stock bias oscillator. But with the 2T R/P head it's insufficient. Only on metal setting with the trim pot maxed out was I able to get a recording that was decent, but it's incapable of getting a proper bias peak. On Nikolai's deck the stock oscillator was replaced with one from a r2r. Someday I may attempt my own conversion - I have the oscillator board from a r2r ready to implant.

However I had my own idea that I thought might be worth pursuing, which was to try putting the 2T head into a Tascam 122. Since the 122 is designed to run at double speed already, it occurred to me that it probably has a more robust bias oscillator to begin with, so it may be possible to get it working properly without using another oscillator. The issue there is that since this deck is 3 head, there are separate wires going to the record and play sections - if I were to simply solder them onto the combination 2T head I would be shorting the record and play amplifiers every time I tried to record or reproduce. So I will have to install a switching relay or something of that sort to allow the amplifiers to remain discrete. I have yet to investigate the power rails to see where I can get the voltage to activate the relay but I am assuming it will be possible with a little ingenuity.

The goal is to have a 2T cassette deck that can record and play at both 1.875 IPS and 3.75 IPS. The resulting deck would be quite unique!

Nikolai did send me a cassette with some recordings he made on his completed 2T cassette deck and the result is pretty stunning. He made some measurements, and it seems to be comparable to a 2 track reel to reel running at 15 IPS. The only real downside is the short play time - only 22 minutes for a C-90. That's one reason I wanted to see if I could install it in the dual-speed Tascam 122. All I have done so far is to create a modified mounting arrangement so the head can be mounted, but the wiring will require more investigation. I don't have a photo of the mounting but here's a photo of the head - wide tracks!