This is potentially good news from Australia as to findings about how COVID-19 is handled by the immune system. It MAY aid in the development of a treatment and at least how we fight it off naturally.

Some good news about this nonsense...

I went to Boise for my appt at the kidney clinic and then my driver got me lunch.

I've known her over 25 years, she was my worker at the mental health clinic and is retired, sorta family.

We had gotten two water cups so the dogs had some and she accidentally spilled one into my cup of fries and started to bawl. I could not understand why for a while.

So she took me to the VA Cemetery to see my dad and uncle's plots in the urn walls. But she had her mouth agape all the way over and back in the first place and eventually I found out the terrible reason.

Not before she split with me to get mom a single rose (mom had a knee replacement that week and wasn't too mobile) and doubled back to see her.

She LOST 100 GRAND when the DJIA lost 2,998 points, and only 1000 or so have come back I just learned on this computer...that was a huge chunk of her retirement!

DAMN. I have no clue about these things. I didn't know things were that heavily vested. She worked at that clinic for over 30 years and got her degree in the 70s because she wanted to help her moderately schizophenic youngest daughter and she also endured her husband quitting drinking and she knew the systems inside and out to the point where they had to find others and get them to take the burdens off her so much. It was like her life. So again, OMFG...and I think I taught her it was okay to say F--K over the years now and then

Now I've lived on my budget for over 20 years as best as I could and got to where I had leftovers for my wants, but I know I'm not so normal. I sold my last car in 2006, that mom sold me for $1.06 (sales tax, the lawyer insisted) because I had nearly $2000 in debt to pay from running it and I had already gone bankrupt in 1995...it HURT to sell that car but I had to be RESPONSIBLE.

Nothing happening to me right now is all that important.

I felt so bad I had to call mom at 11 pm and talk. She doesn't get back to sleep so well though, probably had to do with dad being a volunteer fireman in our small town and the fire siren that called the firemen to the station. She got maybe a third back yesterday but the market ia nor reliable to live on.

But I had better go feed the cat. I don't want her to starve.

Nostalgia is remembering how the troubles you used to have were SO much nicer.

Every time the president comes on TV and talks to us the stock market goes crazy. It's very obvious that the 'circuit breakers' created to halt trading for shourt periods to try and cool down wild swings are ABSOLUTELY USELESS.

What is worse, it's not men but computers panicking, IIRC. Whether or not that is the case I think that the markets need to close for a few days and everyone needs to get their caca in gear before this 'correction becomes NUCLEAR.

The markets are feeding off the virus paranoia and vice versa and I'm sorry but you can't have one or the other, you have to have both a healthy populace and a healthy economy to reciover from such a nightmare. Sending everyone a $1000 check solves nothing if you have nowhere to spend it to help yourself.

AND WHERE ARE THE TEST KITS? I've never seen anything so jacka-- bizarre in my nealy 54 years of life, it ever.

I’m sort of used to this jackassery as the new normal.

I literally tripped on the sidewalk on the way to get in my ride to the practitioner's, fell and couldn't get back up for about twn minutes. I had the driver go in and get a chair and I crawled up frojm it and finally got in the truck. I have trouble with doing that. A bit humiliating. I had my driver take the food out to my cat's feeder.

orange said:
I literally tripped on the sidewalk on the way to get in my ride to the practitioner's, fell and couldn't get back up for about twn minutes. I had the driver go in and get a chair and I crawled up frojm it and finally got in the truck. I have trouble with doing that. A bit humiliating. I had my driver take the food out to my cat's feeder.
Click to expand...
Bruised and battered, nothing broken though I hope. Some days it's just hard to pick up the feets!

Stay at home and wash the hands very often .
Here in Lombardy ( Milan region ) we are in the deep shit .
Only one person from Munich created this disaster . ( unawares of course ) .
Ciao and good luck , guys .
Marco

Please, to blame it on one person now is just a false way to feel better. All of us must pull together, it is the WORLD'S trouble. We have been through this in so many ways before, whether in the scourge of illness or the disease of war.


Vera knows this, and that's why we love her.

I cry with you and for you. Remember this and keep going. 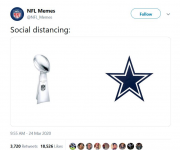