There's one way to be able to sleep at night.

For those that geek and geek heavy LOL. I've had a lab going on here for a bit with VMWare ESXi running 24/7. Believe me when I say the thought of hosting the forum "here" did cross my mind a couple of times, but not with the power co and lines still strung up around the house. In the forum's early days, we had it running in much the same fashion but colocated down in Tampa FL with that sweet deal arranged from a former boss/coworker.

I've had it up, down, and sideways a lot. As I upgraded the main rig, the parts coming out would usually end up with another PC cobbled together and whatnot. Right now here's what's in the lab.. click to view 'er.

So with the AMD Ryzen 7, (or was it the CPU before.. can't recall) I got one of those fancy-smancy RGB "Wraith" coolers with the pretty blinking lights, all the rage with the gaming crowd. Thing is with the PC in the bedroom and it running 24/7, well.. those lights had to GO. But with that, the conundrum.. The PC has VMWare installed bare metal which means the real operating system isn't Windows.. Linux (although that's debatable) .. any operating system that can work with the RGB lighting software to turn the thing off. I won't also get into trying to turn on a PCI passthrough to the USB controller.. that ended up badly.

It got better too.. First idea was to grab my laptop with Windows and the USB cable. Frick.. load the software on the laptop, plug 'er in, turn off the lights and disconnect, right? NOPE.. The other end with it being basically on the motherboard well.. that was a motherboard USB connector. So, I ended up with this contraption after a quick Amazon order. Maybe if I get a good buzz going I'll plug it in now and then turning the blinkies back on, but for now it's going to be dark in here LOL. The PC is behind it, nice and dark. It has that glass side panel, so until today it was being covered up with an old album cover. The trials of geek man, I guess.. hahah! Pardon the fuzzy pic.. weak cam and too much coffee.

I used electrical tape on the display of my RX-F35, which slept on my headboard…

nakdoc said:
Paint the LEDs black- effective and reversable low tech solution.
Click to expand...
Got my spare LT sitting on top, with said-cable fed into the chassis. Now I can just RDP on over to it when I feel like dancing around like an idjit LOL!

At least the USB "enabled" drive on top is able to use the normal USB passthrough, but for some odd reason VMWare omitted keyboards and other "HID" devices like the cooler from using it. Dunno what I can do with that, but hey.. things you geek on, late at night.. 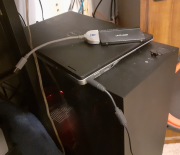