as some of you might just know, about 1 month and half ago, i received a non working Telefunken TC 750 from my italian buddy as a free gift and had started a thread about that elsewhere. Now I am going to restart a thread here were I can finally go on with the latest updates.

Here it is this monster as arrived, it's the TOTL Telefunken model from 1979 despite it has only 2 heads.

The chassis is bigger than average, yet it's just stuffed inside!

The mechanism is a single capstan direct drive motor (that sealed beast) and a quite generous gear driven reel motor.

First evident problem, two reel gears made of that orange gummy plastic are cracked!
These need to be ordered just immediately.

After removing a few parts, I could finally pull the big and heavy mech block out of the chassis!

Second part : unmounting front side of the mech.

here, just a sequence of step by step pictures.

I look forward to the continuation of your Telefunken TC 750 rebuild, Vincent.

I bought a Denon DR-M4 and Pioneer Elite CT-07D from a fellow who had a very nice Telefunken mini system. Here's a video of it playing:

These decks have very robust engineering and well-worth the effort in keeping them going.

Nice system! What I believe after putting my hands on this deck here is that at Telefunken used to build things like if they needed to go to the war! Real tanks!

Third part : unmounting back side of the mech.

again, a sequence of pictures. 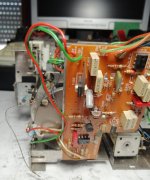 Good job, so now you have the TC-750 and the TC-K750ES
That looks very Philips inside, lot of circuit boards, plastic chassis, mechanism with unbreakable metal parts but with very brittle plastic gears.
I guess the head has an open coil ? 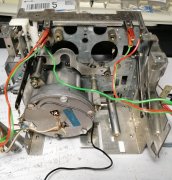 Elite-ist said:
I look forward to the continuation of your Telefunken TC 750 rebuild, Vincent.

I bought a Denon DR-M4 and Pioneer Elite CT-07D from a fellow who had a very nice Telefunken mini system. Here's a video of it playing:

These decks have very robust engineering and well-worth the effort in keeping them going.

Nando.
Click to expand...
The only half speed deck along with the Nakamichi 680/680ZX. 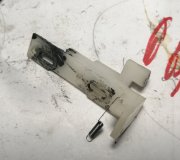 Finally, the new gears are here just exactly when I need to mount them! 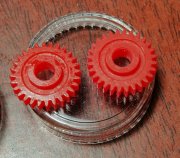 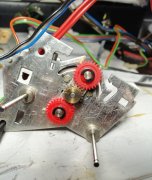 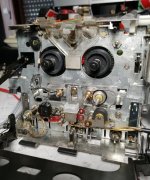 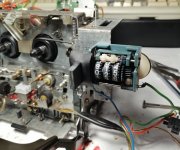 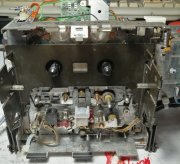 Fourth part : checking some evident faults and giving it a first try!

The sendust head had a not too deep wear groove but a lot of corrosion, so I've lapped it.

there was a cracked joint on one PCB

and a burnt resistor too! 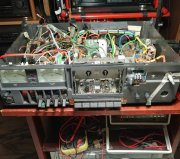 Well, it sort of works... tape running is OK then the mech part is OK but the sound is weird, like only some mid-hi and treble, like a sort of "Left minus Right" sound on both channels.
Need to start investigating the electronics, anyways, mechanically it was cleaned and relubed and it moves the tape correctly, which is just something for now!

It was the only way, Nando.
The service manual is quite good but it doesn't help at all when it comes to unmount and remount the whole thing.
Of course, I had to take TONS of pictures to remember how things are put together again.
These old decks need to be COMPLETELY torn down.

I've got that weird sound once, it was due to a bad ground connection.

Yeah, no shit. Ate you doing all this with no manual??

Fifth part : removing all the PCBs and cleaning the contacts.

So, I've removed all the PCBs to both take a list of all the electrolytic capacitor values and to also clean all the contacts, plugs (i.e. where the many doughterboards are inserted) , switches, etc...
A lot of black oxide all around! 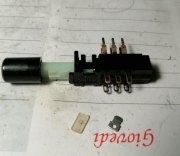 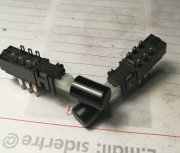 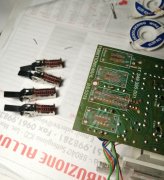 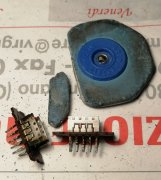 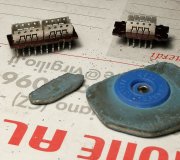 20tajk7 said:
I've got that weird sound once, it was due to a bad ground connection.
Click to expand...
I hope it's something like that, really!

laatsch55 said:
Yeah, no shit. Ate you doing all this with no manual??
Click to expand...
The service manual has the schematics, the PCB layouts, the alignment procedures and an exploded view which isn't that much useful, so for unmounting and remounting I needed to figure it out by myself.
Not an easy deck to handle AT ALL!

Very lucky that Telefunken having you Vince! With the lot of work it might turn out being a real monster and will reward you with most pleasurable listening sessions! Watching with so much interest and waiting for updates! Keep up the good work!

Sixth part : remounting the whole thing back to see how it works now.

So, after cleaned all the oxidized contacts, I also replaced a few capacitors, 5 tantalums and a few electrolytics along the PB signal path (for the record, the old ones don't look gone yet) and mounted the whole thing to try it.

The next step would be to replace all the old electrolytic capacitors but i still need to order them from mouser and, meanwhile, I can check if there is anything else to add to the order.

So, there is a lot of PCBs and wires/connectors to put back into the chassis!

put the mainboard, the input and preamp board and the control/switches board with the meters back into the chassis.

inserted a few smaller daughterboards and connected quite a few connectors!

now, added the mech and connected more plugs here and there...

now added the logic board with its small daughterboard for the reel motor control and connected the last plugs and wires (well, a couple green wires not connected yet in this picture!)

Well, mechanically it works but the sound is still like before, but i try to describe it better than before.

If I plug the deck normally (either from RCA or from DIN, it's the same) , I can hear that mid-treble out of phase sound on both channels.

If I plug only one RCA channel at a time, it sounds extremely faint on its own channel.

If I plug both RCA outs but with one channel with reversed phase at the RCA plug (swapped black and red wires) then I hear one channel mute and the other channel sounds normal, with the bass and all normal frequencies.

In any cases, the VU meters do work normally, with even levels between the channels during any of the above "plug" tests.

And if i measure the signal at RCA outs with the multimeter, there signal is present on both channels.


So, as Leo suggested, it might be a missing ground somewhere?
Then, should I first try to check for continuity just all what goes to ground also in the PCBs?